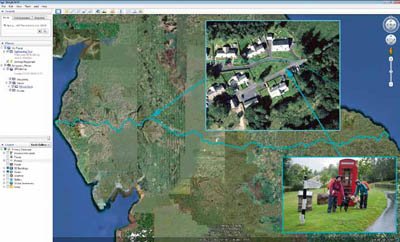 These days, Google maps holds the key to planning. A .kmz file of the trip was available on the web, showing every yard of the route. Zooming in allowed us to pinpoint the rendezvous and in most instances to have a look around using Google Street map. The 'river' on the right is actually the road, when it rains in the Lakes it really rains!

The time taken to complete the walk varies from 11 days (for heroes) through to 18 days (for people who wish to take pictures). The relay record time stands at 19 hours, held by the gloriously named Horwich Railway Mechanical Institute (RMI). My involvement in this 1993 record was planning the schedule spreadsheet for the very significant logistical problem of getting the runners in place, warmed up and ready to go when the incomers were sometimes moving at 41/2 minute mile pace! The individual record stands to Mike Hartley who in 1991 completed the distance in 39 hours 36 min and 52 seconds (he probably did not stop to take any pictures).

Sorting out the logistics for this trip is key. Your choices are:
• to walk, carrying your 'big three' - shelter, sleeping bag, and backpack
• to walk, but stay in local accommodation and have your baggage moved on professionally (by companies who also take you to the start and return you there at the end)

• to walk, but have a support driver 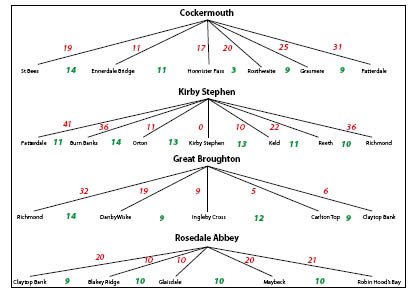 Hub and spoke logistics meant quite a lot of driving on some days. The green figures are the walking distances, the red are the driving distances. Four camping centres were used.

We chose a bit of a hybrid as we had two camper vans, a car and yours truly as a full-time support driver. Many purists consider the use of support vehicles to be less than authentic, indeed the Spanish have the wonderful expression 'peregriño descafinado' for those pilgrims who walk their Camino de Santiago de Compostella with support. The Camino, of course, is probably the oldest long-distance trail of all time, having been started more than 1,000 years ago and winding its way across the entire north of Spain. Mrs Editor and I camino'd a couple of years ago (decaffeinated!).

We operated on 'hub and spoke' logistics, setting camp at four locations and moving at roughly five-day intervals, treating the 'moving' as a rest day for both dogs and humans (we were a little surprised to find the dogs needed the rest more than the humans). This meant that the support runs were longer at the start and finish of a location stint, shorter in the middle. Some days involved more than four hours of driving throughout the day. A bonus was gaining a leisurely acquaintance with all the north valleys and through routes of the Lakes, you would not ordinarily choose to spend four hours per day pottering around some of the lanes used; average speeds were less than 20mph for days on end, the Honnister Pass was climbed a total of nine times. When you do this you eventually catch the light.


Please Note:
There is more than one page for this Article.
You are currently on page 2 Contact Mike McNamee