In the image here the landing stage decking can be seen to converge just above the horizon line - the camera was 19" above ground level. Note when we warp the boards upwards so that they converge above the horizon line the decking appears to be thrown upwards. This upward shift survives through to the final composition even after many layers of waves have been added.

Other than things that are square-on to the camera, everything converges to a point somewhere. This is very easy to figure out with boxes and cubes, and progressively more difficult as you move through towards complex shapes such as faces and bodies. Most man-made objects can be divided down into rectangular shapes or within rectangular shapes and this can be used as guides. Even so, an understanding of what is happening helps when guessing how much perspective distortion to put on a placed element within a composite image. As with so many things Photoshop, it is best to learn your craft on simple stuff such as moving windows, doors and re-cladding buildings before tackling people and animals. 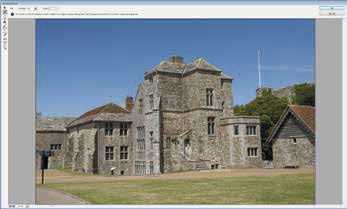 Photoshop to the Rescue
Although the issue of setting vanishing points and perspective planes is complicated, it is because it is amenable to computer calculation that Photoshop is able to provide considerable assistance. The Vanishing Point Filter is the go-to place for this help. From there you can allow Photoshop to compute the new shape of say a window moved from one wall to another around a corner but if you need full control you can make a new layer, set up the grid using the Vanishing Point Filter and then click the 'Render Grids to Photoshop' in the 'Settings and Commands' drop-down list. This draws the grid on its own layer and this may be used when distorting a shape to fit the correct perspective of its new surroundings. Introduced in CS2, this ability to draw perspective girds had long been asked for and remains a powerful aid to the serious montager! We can barely scratch the surface of what this filter can do but there is a wealth of material available on the internet.
(https://www.youtube.com/watch?v=F4tu6uA5pjw)

When montaging the subjects have to share the same horizon line or they will look false. This may be difficult to determine from the original - there might not be any visual clues. Additionally you have to be able to decide if the camera was pointing upwards or downwards as this shifts the horizon line above or below any real horizons in the image - pointing the camera down moves the horizon line up in the frame and vice versa.


Please Note:
There is more than one page for this Article.
You are currently on page 3 Contact Mike McNamee 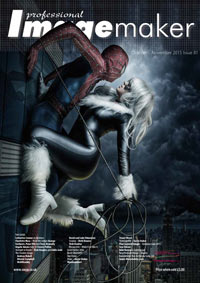