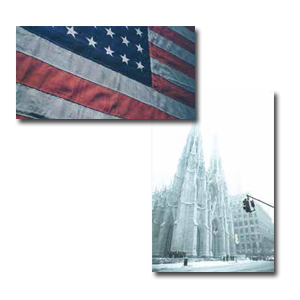 Before I headed out to New York in January this year I'd said to my friends that I hoped we'd have snow. You see, I went to New York in my early teens and remembered the piles of snow on the sidewalks and Central Park blanketed in velvety white flakes. What I didn't expect was for the city to be completely shut down with some of the worst snowfall it had seen in years and a fear that we might not even be able to fly home if the worst of the predictions came true.

Social media called it #Snowpocalypse, and it certainly felt that way. By mid-afternoon on the Monday I was holed up in the hotel room watching the news reports, initially venturing out only to get pizza from a proper New York pizzeria (I still have no idea how they crammed so much cheese inside a calzone). A driving ban was enforced in the city overnight to allow the snow clearing vehicles to work, but it didn't stop me venturing outside and heading down to the East River on foot.

The Queensboro Bridge on my left and an industrial barge with the UN Building in the background on my right provided amble photography opportunities, although looking back perhaps standing on the edge of a big, fast river, late at night during a blizzard wasn't the smartest idea I've ever had. If I could give some perhaps obvious advice here - photographing during a blizzard isn't particularly productive. The snow gets on the lens whichever way you point your camera and out of a hundred or so pictures I was lucky to get a small handful that I was happy with. 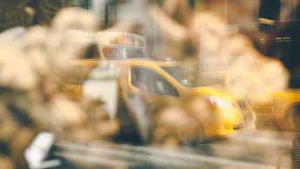 But it was the next day that was quite remarkable. With cars still not in the city I experienced something that not many tourists (nor New Yorkers) will ever experience.

New York had turned into a Hollywood film that had been set in a post-apocalyptic world. Fifth Avenue and Times Square were empty, devoid of vehicles other than those clearing the snow. There were no rattling sidewalk grates from the subway trains passing below and only sporadically were there cafes open where the staff lived close to their place of work. Of course this whole strange situation made for some unique photographs of the long streets filled with pedestrians rather than cars!

The one thing that struck me about being a photographer in New York is that you could find something to photograph whatever you enjoy. The industrial vistas across the rivers and iconic skyline would please any landscape photographer. Street photography enthusiasts would find no end of characters and faces to photograph while chatting to the locals at the plethora of food carts, and Central Park could keep a wildlife enthusiast busy for days with its birds and animals who are largely unafraid of human activity. In fact I did wonder if you could head to a city like New York and spend a week shooting a panel for entry into the qualifications judging. Urban wildlife, city nightlife or the street food culture - all these subjects are rich enough to expand into their own panel with ease. Perhaps it would be wise to leave the family at home if you plan on shooting for a week straight though.

Knowing what you want to shoot in advance is vital to planning what to take for a trip like this, so sit down beforehand and make a list of subjects that you'd like to capture. I'm glad that I broke away from my usual addiction to longer lenses and opted to instead borrow a 28-70mm zoom from a friend. Those straight roads lined with tall buildings and the monumentality of the city simply cried out for shooting wide. I've learned my lesson though; the 70mm was not long enough for me as a 'catch all' lens for shooting travel photography. Knowing that a trip to Paris is on the cards shortly I've invested in a Canon 24-105mm f4.0 workhorse. Previously I've only used this lens when shooting products, and although the quality and speed can be a little lacking I'm hoping it's the solution to packing light without investing in an entire Fujifilm CSC system... although... it is tempting sometimes... 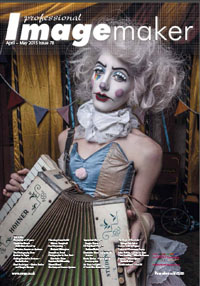