The perfectly poised and balanced gimbal mount which allows cameras to spin and twist effortlessly has been taken from the DJI drone and re-assembled into a hand-held device called the Osmo. It has brought with it the ability to effortlessly lock on to a subject and/or keep the scene steady as the cameraperson moves around. The moving can be on foot, bicycle, motor bike, car, horse, parachute or any of the other crazy forms of transport being used by today's generation of risk takers. Such is the thirst for tight-on-the-action shooting that cameras were attached to the bikes in the Olympic velodrome, although these are currently fixed-lens, fixed-mount devices. The practical uses are almost limitless but making well-aligned straightforward walkthroughs without shake, judder or misalignment are one of the most obvious (things are not perfect, though, it is still better to walk carefully!). Following a bride down the aisle is an expansion of this idea which is already proving popular.

The initial and most striking feature of the Osmo is the quality of the engineering - everything moves effortlessly and the quality of the brushed aluminium is a thing of beauty on its own! None of your rubber bands to hold the iPhone in place, this is a serious piece of metalworking!

The battery pack contains a 10.8 Wh power supply in the handle and, with the gimbal and camera, it weighs in at 538g. Paired with a 16GB SD card this will keep you filming for 36 minutes of 4k video, a 64 GB card will make145 minutes, although the battery will only film for about an hour.

Visuals are provided via an attached smart phone (separately provided by the user). 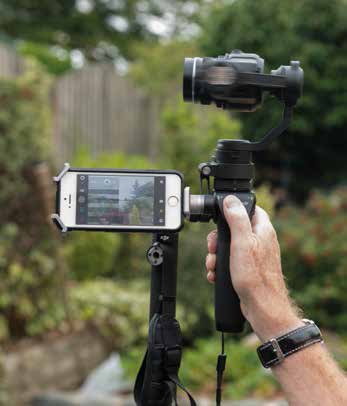 The unit is held in the hand the way you would hold an Olympic torch (to remain topical!) with thumb-operated controls on the moulded top below the gimbal itself. To make panoramas you can hold the device above your head and allow it to rotate around from there.

The handle houses a stereo microphone, a 3.5mm audio jack for a lavalier mic and a screw mount at the top for the gimbal. The battery itself is inserted from the bottom. Several buttons and a couple of LED indicators are dotted around the thumb and index finger areas. Thanks to the soft grip and well-thought-out curvature, the Osmo is a comfortable handheld gimbal. When in the hand, your thumb can easily reach the slider for power, a flat joystick for manoeuvring the camera, a capture button for still photos and a video-recording toggle.


Please Note:
There is more than one page for this Article.
You are currently on page 3 Contact Charlotte Moss