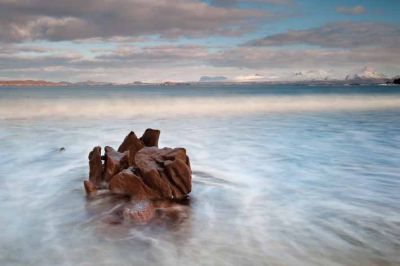 The beauty of Scotland is not simply the places, but the weather you experience when you are there. I spent a lot of time at both these locations (an entire day at Mellon Udrigle) and both days delivered completely different conditions. The day I visited Udrigle the skies were heavy and there was a storm building up across Gruinard Bay and out to the open sea. As I arrived the tide was retreating and the rock outcrops were emerging from the windblown waves. The air temperature was low, and combined with the wind-chill, it became bitter. Even with my full winter kit on (with down jacket), I could feel the wind clawing through the gaps in the layers and biting at my skin. As I worked, the sky darkened further and I found myself perched on the outcrops as the seawater crashed and swirled around me. This created a sense of edginess in me and a feeling of being at one with the elements. As the seawater crashed and retreated through the boulders it turned white and brighter than the dark stormy sky. My choice of long exposures seemed fitting to give a graphic image of motion and energy, and on several occasions I had to get off the outcrops before the occasional large swell dragged me into the water. 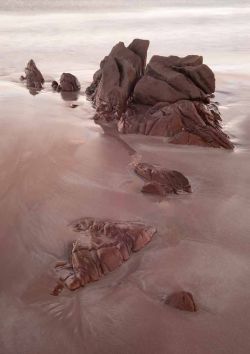 My visit to Mellon Udrigle was a day of total contrast to my time at Udrigle. The skies the night before had been totally clear and star-filled. The morning greeted me with a steady sea breeze that was enough to keep the shallow seawater that was trapped on the sand between tides frozen for the entire day. The sun was low in the sky, which is a bonus of photographing at this time of year due to the soft colours and long shadows, and it offered a visual comfort of warmth due to its glow. I walked alone onto the bay at 9.30 and began making pictures. Within an hour I was totally transfixed and soaked up in my work. Everything presented images to me. Seaweed, sand patterns, ice patterns and the waves coming in across the bay and crashing onto the sands and swelling in a muscular fashion around the rocks dominating the beach. I was there when the sun rose above the small hills in the morning, and I stood, still in awe as the last light of day died when the sun dropped below the horizon and I watched as the shadows diluted away. It was at this point I realised I had not stopped for any food or rest and I peered at my watch to see it was 4 pm and my time was up. My feet were numb, my stomach empty and my head full of excitement because I knew that when I got back to Aultbea I could look at the day's explrations again as the digital files appeared on my laptop.

The next day I made the long journey home to Lancashire with memories of standing in the seas and lochs of Wester Ross in my wellington boots and being able to forget it all for a while. I also found myself subconsciously seeking out the possible opportunities of when I could return. I know Wester Ross will be there when I am long gone, but in the meantime I feel it is up there waiting for me and my camera.


Please Note:
There is more than one page for this Article.
You are currently on page 3 Contact Paul Gallagher